Her Time to Shine

I often ask myself, how does one little girl make such a big mess? I think the obvious answer is, well she's messy. While it's true that she plays hard, and almost never cleans up, she is so much more than messy!

Brooke is creative. She will take an old patterned sock and turn it into a new Barbie outfit, and often one that I might even wear, not in Barbie's size of course.  I once gave her a cardboard box, tape, and scissors and left the room for 20 minutes. When I returned, she had created a child size desk and chair set. For a while I called her Edward Scissor-hands.

The truth is I'll take messy any day, because what comes along with it is so much more. She's kind, and happy, funny and sporty. She's determined, and independent, along with artsy and incredibly perceptive. She has better EQ than most people at my office. She recognizes other people's emotions and adjusts hers accordingly. She's always whispering to me about how the boys should change their attitudes.

She's still at the age where she wants to try all new things....with the exception of food. We are working on that. I recently gave her a list of activities to choose from, and she chose ice skating. Never in a million years would I have planned to spend my Saturdays at a 20 degree ice rink. I spent 8 weeks freezing my ass off watching one little determined girl try to glide from one end of the rink to the other. And by the way, it took the full 8 weeks to make that happen. I thought watching swim lessons was slow. But she ends every activity with the saying, "It was AH-Mazing!" So how could I say no.

She's involved in soccer, and baseball, as well as hip hop dance. She did swimming for years, has tried volleyball and joined girl scouts. She has so many interests it's hard to keep up. But it's her time to shine.

She followed her brothers around every baseball and soccer field for years, and "watched" hundreds of games, without many complaints. She was always one of the bleacher buddies. Finding any other little sister to play with. We've been lucky. She just goes with the flow.

This past weekend, we decided it was time to tackle her room. I've been walking past it for a year with the goal of organization, and finding a spot for everything. That's not easy when everything also includes tiny little shopkins, and LOL dolls, next to collector rocks, and snow globes.

This girl has stuff!

It took us 6 hours to throw away, donate, sort and put the room back together. She helped about 70% of time until she found the giant styling head she had lost 7 months ago. Off she went to do make-up and hair for a few hours. She returned just in time to make her bed and put the last items in place. My Mom would say that's about when I used to return too.

It's Brooke's time to shine, her room is ready for it, and so is she! 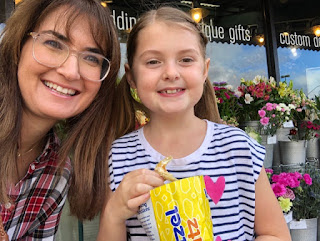 I'm 5 runs in to my new running program. Every runner will tell you that it's a mental game. I get that, but my body tells me I'm playing a different game.
The thought of running for 40 straight minutes frankly bores me.
I need to mix it up. The new app has me running for 3 minutes, walking for 2, and sprinting for 1, rotating through that for 40 minutes. I tell myself I can do anything for 3 minutes. I'm starting to see the truth to the mental game.
Now that my mind is on-board, I need my body.....so I went shoe shopping.
I learned that I need to size up in order to have enough room for my feet to swell. I wonder if that's true for my running pants? Or maybe just an overall theme for my jeans.
The new shoes did the trick. I shaved about a minute off my pace. (Although I only had room to go up.)
Here's what I learned today from the running app's tips.

And my own tip - Don't try to schedule a run at the same time every day. If your schedule changes often, like mine does, just jump in when you can. I made the mistake for years trying to schedule exercise. Now I see an open hour, and fill it with a run.

Most importantly: Find any motivation you can.....mine was in the form of new shoes!
Can't wait for tomorrow! 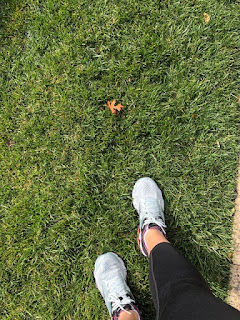 Lori
I'm a full-time working mom, living in Silicon Valley with 3 very active kids and an equally busy husband. Every day is a balance, takes a ton of patience, organization, and a little luck to make it all work. I believe in asking for help, outsourcing when possible and repaying the favors often. My glass is usually half full...unless somebody knocked it over.